There have been moments when Joanne McNutt wished her mother, Marie Kacevychius, had cancer instead of dementia. “With my dad, with cancer, the appointments were there, the doctors were there, the care was there, the home care, everything,” she says. “Everything was a roadblock for my mum.”

When Kacevychius was diagnosed with dementia just a few months after her husband of 58 years died, her children felt they were on their own. “This dementia is a car wreck,” McNutt said. “We had no knowledge.” She was steering her mother’s care, trying to work full time and stay up all night with Kacevychius, who paced for up to 24 hours a day, and looking for a new doctor after transferring her mom from Sydney to Truro. “You’re just going on adrenaline.” McNutt took six months of unpaid leave. Even after she “hit the jackpot” with a placement in a nursing home, the caregiving continued. McNutt still checks on her mother at least once a day, monitoring her care or calming her with a phone call. I will always advocate,” McNutt says. “She advocated on my behalf for so many years — for all five of us.”

When Isabel Kelly stopped volunteering in her parish it took 26 people to replace her. The former Catholic nun and school teacher had raised two children in Halifax and Harbour Main, N.L. As the youngest of 13 children she spent years caring for first her elderly parents and then one of her sisters. “She really had the life of a caretaker,” daughter Catherine Kelly says. “It was who she was at the core.”

For the nine years since Isabel’s diagnosis, Catherine and her brother Eddy Kelly have been caring for their mother. At first, Isabel divided time between Eddy’s home in Beechville, and Catherine’s in Ontario. “She flourished,” Catherine recalls. When Isabel could no longer fly back and forth comfortably, Catherine took her back to her family home in Newfoundland, where she still lives with Catherine, her partner and two young children. Catherine and Eddy speak of their mother, now bedridden, with love and patience — but they are mindful of the toll caregiving takes. 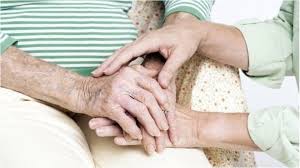 Eddy found social opportunities for his mother earlier in their journey.

“There’s a great benefit for the loved one with dementia,” he says, “but it also gives the caregiver a mental break.”